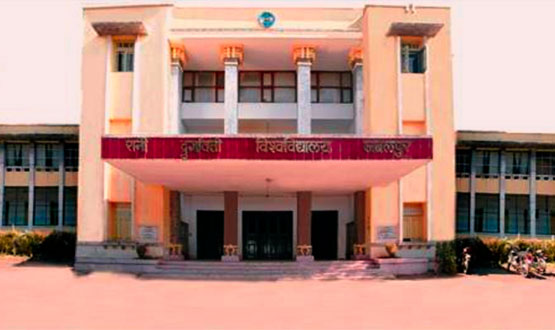 It was named after the queen Rani Durgavati. Rani Durgavati was born on 5th October 1524 A.D. in the family of famous Chandel Emperor Keerat Rai. Rani Durgavati's was a personality with varied facets. She was valiant, beautiful brave and a great leader with administrative skills. Her self-respect forced her to fight till death rather than surrender herself to her enemy.

It is the main University of this city and has been graded as B++ by the National Assessment and Accreditation Council (NAAC). The University was constituted and established on 12 June 1956. In the year 1983, the Government of Madhya Pradesh renamed the University of Jabalpur as Rani Durgavati Vishwavidyalaya in her memory. Government of India paid its tribute to the valiant Rani by issuing a postal-stamp commemorating her martyrdom, on 24th June 1988.

The University campus is spread over 99.63 acres (403,200 m2) of scenic beauty and environment-friendly surrounding. It accommodates:

Other facilities like post office, bank and printing press are on the campus. It is, therefore, possible to say that the University campus is a city within the city of Jabalpur.

Still Have any Doubts.... Feel Free to Contact Us